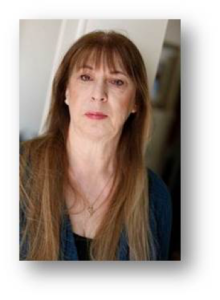 This week on Author on the Couch

*Sheila is giving away a copy of her psychological suspense novel INKSLINGERS BALL to one person who comments on this post.

*I’m giving away a $15 Amazon Gift Card to one lucky person who signs up for my newsletter in the month of January.

Sheila: There can be nothing more impactful than the murder of my daughter in 2000. We had a very difficult relationship for most of her life, but I always told myself that if she could just make it to 22 or 23, she would grow out of it and things would be okay. I was a little off on the timing, but at 26 she was starting to come around, to mend fences with several of us who loved her.

Then she met Tom Schnaible, a good-looking 34-year-old federal agent. Love at first sight and all that. Thus began a tumultuous few months.

At their request I analyzed his handwriting and was alarmed by the red flags for danger that I saw there. We discussed his need for control and her resistance, but it didn’t matter, she had never listened to my advice. He moved in with her and within a year he had killed her and himself. It’s always in the back of my mind, but the horrific events in San Bernardino, just two days ago at this writing, have brought it all to the forefront.

Still, I’ve learned that there is life after the death of the body. Jennifer has made it abundantly clear that she is still involved with her family from the spirit world. And for that I am grateful.

Me: Sheila. I’m speechless. I can’t imagine what you’ve been through losing your daughter in such a horrible way. I’m glad you have the solace of knowing she is still “involved with her family” in spirit. That goes a long way to ease the anguish.

Sheila: My ability to set goals and work towards them is a good one, but I don’t have nearly as much self-discipline as I’d like to (see next question!). The editors and publicists I’ve worked with have told me I’m one of the hardest working authors they know. I’m still waiting for that to pay off. I’ve been in business for myself as a forensic handwriting analyst since 1989 and have learned how to get things done, so that has stood me in good stead as I work on my fiction writing career, too.

Sheila: The aforementioned lack of self-discipline means that it takes me at least a year to write a book. I could blame it on the bills-paying work, which must come first, but the fact is, I am in the enviable position of (most of the time) being able to set my own schedule and yet I still procrastinate writing. The fact is, I don’t like writing, I like editing. But the sad fact is, you have to write before you have something to edit.

What was your high point as a writer—a time when you were happiest, on cloud nine, flying high?

Sheila: That’s easy—when Capital Crime published the first book in my series, they sent it out for review. It got a starred review in Publisher’s Weekly and Kristen Weber, a senior editor at Penguin, bought the first four books. I think the only thing more exciting than seeing POISON PEN published by one of the biggest publishers in the world was the UPS delivery of a box containing copies of the second book, WRITTEN IN BLOOD, six months later.

Me: What was your low point as a writer—a time when questioned your path as a writer, a time when you felt really crappy about your writing?

Sheila: That’s easy, too. While I was writing the fourth contract book, which became LAST WRITES, Kristen got married and left Penguin to go out on her own as an independent editor. The editor who took over for her did not love my books as Kristen had. She insisted on changing my perfect title (UNHOLY WRIT—the book is about a religious cult and a missing three-year-old) and giving the book a cozy cover. The problem with that is, my books are psychological suspense, not cozies. So people who like cozies don’t like the fact that there’s profanity and a bit of violence, and people who like psychological suspense aren’t attracted to that cover. Oh, and did I mention, this editor unceremoniously dumped me?

How did I get over it? I self-published WHAT SHE SAW, a standalone that dealt with two themes that have always fascinated me. Then I accepted an offer from Suspense Publishing, who are just great, to take on my series. Everything with Suspense is a team effort. They don’t email me a cover with a note: “here’s your cover, we hope you love it as much as we do…and by the way, you don’t get any input.”

Sheila: People are always asking me if I’m Claudia Rose, my protagonist, because her work as a forensic handwriting expert so closely mirrors mine. But the answer is no, she’s much braver (or more foolhardy?) than me, and she likes to fly. She also drinks coffee. See, we’re really different, lol. Claudia is a modern, independent woman who is commitment-phobic, which makes her quite a challenge for Joel Jovanic, the LAPD detective who becomes her guy. Hmmm, this is beginning to feel too familiar.

Me: Name a writing pet peeve of yours. Something that hits you like fingernails-on-a-chalkboard every time you see it.

Sheila: I hate it when someone says “very unique.” That is the nails on a blackboard moment for me and I want to yell, “You can’t modify unique! If it’s unique it’s one of a kind, so how can it be ‘very’ unique?” I know, pretty petty. And I’m now self-righteous about being judicious in the use of adverbs, having learned first-hand how they weaken one’s writing. 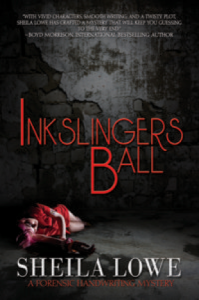 Sheila: Since early childhood I’ve had an affinity with ancient Egypt. My living room is filled with figurines of Isis and Horus and loads of statues of Bast, the cat goddess, including one my sister-in-law sculpted for me. I’m sure I had a past life there, so was not surprised when a psychic once told me he saw me with a pageboy hairdo, in a tunic, working as a scribe in the house of a court official (see, handwriting, even if hieroglyphics, as always been in my life…or lives). The bad part came when the master of the house displeased the pharaoh and the household was walled up alive in a tomb. Well, hey, I’m a Scorpio. We have a dark side. Made delving into people’s psyche through their handwriting, and mystery writing, the perfect twin careers for me.

Me: Tell me about your novel INKSLINGERS BALL. By the way–I LOVE this title!

Explosive drama erupts when a secret tattoo jeopardizes the life of a teen with a tortured past. In Inkslingers Ball, handwriting expert Claudia Rose joins forces with her lover, detective Joel Jovanic, who is investigating a firebombing, a young girl found dead in a dumpster, and the disappearance of an investigative journalist.

Coming in the spring: OUTSIDE THE LINES

Me: Share with us a favorite paragraph or two from your newest release.

Jovanic drove to the hospital and shut off the engine feeling sick to his stomach. So few hours ago Claudia had been in his arms, giving herself to him without reservation. Now there was a wall between them a yard thick and a mile high. From where he sat, he was not sure he would ever be able to breach it. Or even whether he wanted to.

He had been a cop for more than twenty years. A good cop. That didn’t mean he had never bent a rule or cut a corner, but what she was asking him to do went far beyond cutting corners. Claudia was the love of his life. He wanted to grow old with her, to take care of her and shield her from the crazy and dangerous situations she all too frequently got herself into. He could understand her attachment to Annabelle, and if he had not exactly welcomed the girl’s intermittent presence as part of their picture together, he had reconciled himself to it. But his dreams of the future had never included Claudia asking him to cover up a crime.

If you enjoyed this post, please hit one of the handy-dandy Click-to-Tweet buttons below! Thank You!

To Purchase INKSLINGERS BALL go to:

You can find Sheila in these places:

Abbie Roads writes dark emotional novels featuring damaged characters, but always gives her hero and heroine a happy ending… after torturing them for three hundred pages. Her first book comes out on October 4th from Sourcebooks.