Every Monday I will post something mental health related. I hope you find these posts helpful.

For the entire month of August, if you leave a comment on any “Manic Monday” post you are entered to win a $10 Amazon Gift Card. I’ll draw a random name on September 1st and email the winner their prize.

As many of you know, I’m a mental health counselor. Today I’m going to share one of the most powerful tools you can use to stay emotionally well.

According to Dictionary.com the definition of mantra is:

-an often repeated word, formula, or phrase, often a truism

This can be used for the positive or the negative. A negative example: A child who hears his parents call him stupid over and over again, will begin to believe he is stupid and then begin to do stupid things. The good news is the opposite is also true. Repeating a mantra can change your belief, change your behavior, and change your life in a positive direction.

The trick is to find the mantras that speak to you. There will never be one universal mantra for everyone. And there will never be one mantra that works on all days for all situations. So it’s always best to have a few of them handy–written down–to remind yourself of what’s really important in life.

A few years ago, I went through a deep writerly depression. The kind of depression where I almost quit writing–I was drowning in negative feedback. One of the things that helped me out of that depression was a speech by Theodore Roosevelt: The Man in the Arena. I keep a copy of this speech taped to my desk so whenever I look down, I see it.

THE MAN IN THE ARENA

Excerpt from the speech “Citizenship In A Republic”

It is not the critic who counts; not the man who points out how the strong man stumbles, or where the doer of deeds could have done them better. The credit belongs to the man who is actually in the arena, whose face is marred by dust and sweat and blood; who strives valiantly; who errs, who comes short again and again, because there is no effort without error and shortcoming; but who does actually strive to do the deeds; who knows great enthusiasms, the great devotions; who spends himself in a worthy cause; who at the best knows in the end the triumph of high achievement, and who at the worst, if he fails, at least fails while daring greatly, so that his place shall never be with those cold and timid souls who neither know victory nor defeat.

When I came out the other side of that depression, I vowed to take better care of my mind. And my mantras have helped me. I even have my two favorites tattooed on me, so I never forget them. 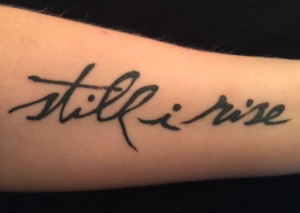 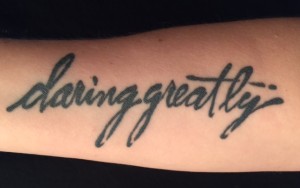 Has a mantra ever helped drag you out of a dark place?

*Stay tuned. Tomorrow is another session of Author on the Couch, featuring L.D. Rose!

Abbie Roads writes dark emotional books featuring damaged characters, but always gives her hero and heroine a happy ending… after torturing them for three hundred pages. Her first book will be out Summer 2016.