This week on Author on the Couch, I’m conducting a session with Anna J. Stewart. 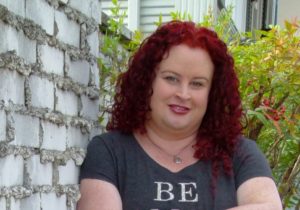 Anna is giving away a digital copy of ASKING FOR TROUBLE, book 1 in The Tremayne Family Romances. All you have to do is share this post and leave a comment. Be sure to tell us that you shared it!

Anna: I was fortunate to do quite a bit of traveling when I was younger, mainly in my teens and not to the usual places you’d think. Visiting countries like Greece, Israel, Turkey, and Egypt opened my eyes as to how big-and different-the world really is. Experiencing those cultures at an impressionable age made me both appreciate my own opportunities while recognizing how important differences are. I definitely had a bit of culture shock, but it wasn’t the first time I was told I couldn’t do something, or say something because I was female. It did definitely stick with me, however. It’s probably one reason I’m a big proponent of “girl power” and female independence, LOL.

Me: GIRL POWER! All women need to be a proponent of girl power!

Anna: Probably my sense of humor and sarcasm. I’m quirky and at times, it definitely seeps into my characters, especially my heroines. In some of my books I’ve dealt with some serious topics (childhood cancer, a hero with cancer, abusive childhoods, alcoholism) so finding the humor helps pull me through as the author and hopefully the reader as well.

Anna: I’m lazy. *ducks head* The hardest part for me is actually putting my butt in the chair. But once I do, I love it. That said, my love of TV and movies probably gets in my way a lot. Good thing I get a lot of ideas from my viewing hours.

Anna: My high point was definitely finaling in RWA’s Golden Heart contest. Getting that call was amazing and set me on the path I’m on now. Without that final, I wouldn’t have gotten my first agent, or my second/current one. It opened doors I’d been banging on for years. Unfortunately the manuscript I finaled with (an urban fantasy romance) didn’t sell despite multiple house interest. They didn’t know what to do with it, which was incredibly frustrating. But I wanted to sell to a traditional publisher. So I switched genres and soon after sold to both Berkley and Harlequin with contemporary romances. One day I’m going to sell that urban fantasy. All because of that contest.

Anna: I think having that Golden Heart book rejected by everyone really took the wind out of my sails. I was certain that was going to be “the one”. I wanted it to be because I love writing paranormal so much, but I wasn’t in the position to self-publish. I was devastated. But I had a choice to make: try another path or give up and after fifteen plus years, I wasn’t about to walk away.  It all worked out in the end. J

Anna: I think I’ve written…twelve now? Four paranormals (not published), one western (that will never see the light of day), one romantic suspense (two more to go in the series), and the rest are contemporaries (both sweet and mainstream). Oh, and then I’ve written six novellas in the last two years as well.

I average about 2-3 months per book, depending on deadlines and how clear the story is in my head. It also depends on the word count but because I don’t tend to plot, it can get a little tricky. I know where I’m starting and I know how it’ll end—how I get there tends to be what takes the most time. My June book (RECIPE FOR REDEMPTION) actually took me about 6 weeks, mainly because I had to ditch the original story idea and come up with something new (long story)and still meet deadline. Thankfully the new idea for a disgraced celebrity chef seeking redemption really clicked and ended up being one of the most fun books I’ve written to date. Any time I can add a little comedy to my romances makes me a happy writer.

The most painful part of the process is getting over “the middle”. Getting that first half “right”, where I know the conflict and the plot are meshing and the characters are on the right path is vital. Once that falls into place, it’s downhill and the writing speeds up.

I’ve written a number of stories that had difficult plot elements (embezzlement, an art heist, a con job, and most recently, hunting down a serial killer). Getting all those details right? Oy, you should have seen my desk and all the notes and diagrams and random thoughts. It’s a good thing I like puzzles. Putting everything like that in order so it makes sense can be extremely painful. But when all the pieces finally fit, there’s nothing like that rush.

Anna: Ooooh, this one’s easy! Well, maybe not. Aaak! Only one? I’d have to go with Roarke from the JD Robb In Death books. He’s just everything I want a hero to be-he’s a semi-reformed bad-boy, a mega-millionaire, and he’s crazy in love with his wife, which honestly, I think is the sexiest thing about him. What that man won’t do to protect the woman he loves.  *swoon*  The Irish accent doesn’t hurt, nor does his black hair and blue eyes…he’s the total package. I also love the fact that after all the books, I’m still learning new things about him.  There’s another layer in every story and he just gets better.

Name a writing pet peeve of yours. Something that hits you like fingernails-on-a-chalkboard every time you see it. Why does it bug you?

Anna: OMG, how much time do you have?  First of all, it’s “I couldn’t care less”, not “I could have cared less” because if you could care less, you would.  Arugh!! Drives me batty in books, movies, and TV!  Also, a person is hanged, not hung (well, I suppose some are…<G>). I’ll stop there for all our sakes. 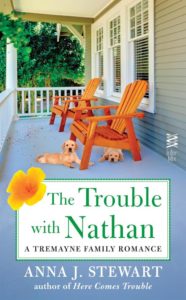 Anna: I’m just now learning this lesson. Stop reading reviews.  Good and bad, doesn’t matter. Let’s face it, as humans we’re wired to believe and focus the bad. I have 20 great reviews of a certain book—and one really bad one. Guess which one I dwelled on the most? Yeah, I think the trick is not reading them. Barring that, accepting the fact not everyone is going to love or even like what you produce is the only way to preserve your sanity. If you need them for quotes or your website, get a friend to read them and pull what you need. Most of all, never, ever, I repeat NEVER engage/argue/defend. Write the best book you can, the way you want to write it, and then let it go. What happens after that is out of your control. Once you accept that, life gets a bit easier.

Rejections are a different story. They can be useful, especially if you’re getting the same feedback about a story or a character, etc from more than one source. But also remember that you are your story’s architect. No one can tell your story but you. Wherever the feedback comes from, especially if it’s something you’ve asked for, always be respectful of the person giving it.

I really do believe a lot of this business, especially in regards to traditional publishing, has to do with luck–finding the right editor/agent at the right time so as the stars all align. It’ll happen. I was rejected by over 30 agents before landing my first one and just as many editors. Keep writing. Keep developing your voice. Keep trying to stand out. You’ll get there. The only way you fail is if you quit.

Me: I whole-heartedly agree! The only way you fail is if you quit. Amen sista’!

Tell me about your contemporary romance  THE TROUBLE WITH NATHAN.

Nathan Tremayne shares a dangerous secret with his father, Jackson, and sister Sheila. Together they are Nemesis, the infamous cat burglar who targets the wealthy. But when Jackson is framed for stealing the priceless Crown of Serpia, the whole family is at risk.
Nathan isn’t about to let his father go down for a crime he didn’t commit, but finding the real culprit won’t be easy with Laurel Scott, the nosy, pushy, drop-dead gorgeous insurance investigator following his every move.

But Laurel has secrets of her own. Posing as an insurance investigator was part of her own plan for the Tremaynes. As their attraction heats up, and the truth comes out, will this pair of thieves steal each other’s hearts?

Me: Share with us a favorite paragraph or two.

“I’m sorry, but this section of the museum is closed until future notice.”

The female voice drifted over Nathan with the same softness as the jasmine scent wafting down the tiled hall of the Wellington Museum. He glanced over his shoulder, eyes skimming the curvy figure of the brunette standing beside him. Polished, his sister Sheila would say; bordering on stylish from her tailored button-down white blouse and snug, knee-hugging black skirt, all the way to her sharp-toed patent black pumps. Every inch of this woman said collected and professional. Had it not been for the suspicious glint in her curious brown eyes and the fact he needed to get into that display room, Nathan might have let his gaze linger–and enjoy–longer.

“Yeah.” He pushed away from the door frame and turned on the double-dimpled smile that had sent numerous women tumbling into his bed. “The crime scene tape kind of gave it away.”

Her deep red lips didn’t curve. They didn’t even twitch. Instead, she tapped long, manicured fingers against her waist, kicking out a hip as she arched a brow. Her hair fell down her back in soft waves, hints of copper catching the recessed lighting of the museum’s ceiling. Sable, he thought. He’d bet her hair would feel like sable sliding between his fingers.

Nathan resisted the urge to clear his throat, something he tended to do when uncertainty descended. He prided himself on being able to read people; it was after all, part of his job as a security expert and thief. Looking at this woman, however, filled his mind with an odd kind of static that prevented him from pinning her down. Appearances aside, there was something electric yet unreadable about her.  One sparked his blood. The other…well.  Nathan grinned.  There was little he enjoyed more than a challenge.

What advice do you have for dealing with rejection/bad reviews?

You can purchase THE TROUBLE WITH NATHAN here:

You can connect with Anna here: 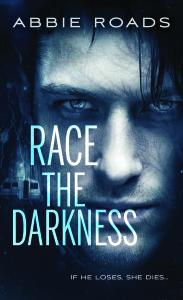