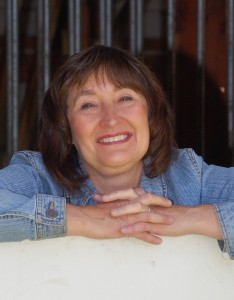 Jami is giving a way a digital copy of one of her books to one lucky person who leaves a comment!

Jami: Without it being too much of a downer, probably the accidental death of my father when I was three years old. My mother never remarried, so I never had a father. I’ve noticed I write a lot of single fathers in my books, instead of single mothers even though I was raised by a single mother. A mental health therapist friend of mine told me I’m re-writing the past.

Me: What a tough situation all around. Tough for you being three years old and having lost your father, but also for your mother–having to raise a three year old, and grieve at the same time. Sorry you had to go through that.

It’s intriguing that those parts of ourselves that have been wounded somehow end up on on the page–without our even intending for it to be that way.

Jami: I’m driven, and competitive. I want to be the best.

Jami: Same as above. It’s hard for me to back off, take a deep breath, and have patience. Nothing in this business comes quickly, but I sure want to force it to come quickly.

Jami: I’ve had lots of high points so it’s hard to pick one. My highest points are when I hear from a reader that something I’ve written has affected them profoundly or gotten them through some tough times. To me, that’s what it’s all about.

Me: What was your low point as a writer—a time when questioned your path as a writer, a time when you felt really crappy about your writing?

Jami: I had a former publisher who liked to tear me down to prove that I needed her services. For a few years, I actually believed them until I was at a reader conference, and multiple readers walked up to me to tell me they loved my books, but I needed better editing, and I should go indie. So I walked away from a series I loved and went indie. I never looked back.

Me: Gah. Why are people so cruel? I’ll never understand cruelty like that. And good for you breaking away from that and going at it alone!

Jami: Rachel in FOURTH AND GOAL. She’s a clutz. She’s smart but she’s indecisive and can’t make decisions. We’re both Geminis and can see both sides to everything. She also loves horses. 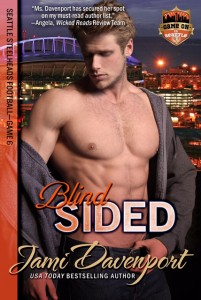 Jami: Since I was old enough to form words and write them down. I have a book I wrote and illustrated when I was in first grade in the attic. I’ve written since then, but only in the past ten years did I share my books with anyone.

Jami: Tyler Harris in FORWARD PASSES, a foul-mouthed bad boy who doesn’t care what anyone thinks, he does his own thing. Underneath all the bullshit is a guy who is hurting and lonely. I love my damaged bad boys.

Me: <swoon> I love me some foul mouthed, damaged, bad boys!

Tell me about your novel BLINDSIDED.

He trusts his gut, she trusts her numbers, and neither trusts the other, as a billionaire’s mission to bring hockey to Seattle clashes with his passion for the woman who holds his heart.

Ethan Parker, a billionaire determined to bring a professional hockey to Seattle, will stop at nothing to realize his dream. After signing an agreement to purchase another city’s team, Ethan is anxious to make the move to Seattle, but a gag order by the League forces him to keep the sale a secret until the season ends, leaving him no choice but to go undercover as a consultant to study his team during the playoffs.

Lauren Schneider, Assistant Director of Player Personnel for the Giants hockey team, gets no respect from the team’s testosterone-loaded staff. When Ethan bursts onto the scene, full of charm and genuinely interested in her opinions, she shares the team’s weaknesses and discovers a weakness of her own–for Ethan. But when his true identity is revealed, and he starts cleaning house based on her unwitting input, his betrayal cuts deeply on both a professional and personal level. Bound by an employment contract, Lauren reluctantly moves to Seattle to work for the newly christened Seattle Sockeyes and her sexy, infuriating boss.

Lauren and Ethan must come to terms with their passions–for the team, for hockey, and for each other. Will their situation build a frozen wall between them, or will their love burn hot enough to melt the ice shielding their hearts?

Me: Share with us a favorite paragraph or two from BLINDSIDED.

Jami: Two of my favorite parts:

I think this section shows how strongly she’s gotten to the man who couldn’t be tamed.

“No,” she begged, as he wore down her resistance with deep, searing kisses, branding her mouth as his and wanting to mark her body as well. The urge to ruin her for any other man hit him hard, because if he ruined her, she would surely ruin him as well.

This section is where he’s still resisting but she’s starting to break down his walls.

She touched his jaw, and he actually flinched. “You’re so much more complex than you pretend. I don’t know where to start with you, which battle to fight first, which secret to mine for the truth.”

“None of them,” he said tightly. “You don’t want to know what’s underneath because it’s not pretty. In fact, it’s damned ugly.”

To Purchase BLINDSIDED go to:

You can find Jami here:

If you’d like to be notified of new releases, special sales, and contests, please subscribe here: http://eepurl.com/LpfaL

If you are interested in being an Author on the Couch, email me at: