(don’t you just love her scarf?) 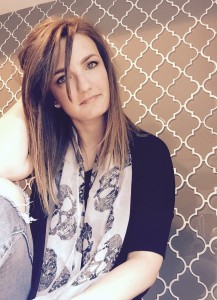 L.P. is giving away a $10 Amazon Gift Card to a random person who comments on today’s blog!

L.P.: Wow, this is a tough one…I have lots of things happen that have shaped the person I am, but just one? I would have to say the birth of my daughter. My husband and I tried for a while before I (not we, he didn’t gain 35 pounds or need stitches in his genitals) actually got pregnant. I was so terrified my whole pregnancy that it wasn’t real, that something would go wrong. But it didn’t and we have this amazing little girl. I’m not a patient person…at all. But anyone with a three year old will tell you, you MUST have patience. So, I’m learning. She teaches me, every day, how to be a better person.

L.P.: I love to escape from reality. Not that my reality is stressful or anything (current full house remodel, adoption process, writing, working full time, three year old drama queen)…But I enjoy binge watching shows on Netflix, I love movies, and I LOVE reading. So I think it really helps when I sit down to write that I can just immerse myself in the world I’ve created no matter what’s going on around me. I’ve written chapters at places like Discount Tire. I daydream when I’m at my day job, so that helps me come up with new ideas or fix plot problems I’m having.

L.P.: The same trait that helps me, hinders me. I read The Guitar Face series by Sasha Marshall while I was trying to write the second book of The Devil’s Share series. I got so into her amazingly awesome world and bad ass characters that I couldn’t focus on mine. I’ve learned that while I’m writing rock romance, I can’t read rock romance.

L.P.: Getting my letter from Borough’s Publishing Group that they wanted to publish Play Nice was a really high point. I was at work (my day job) when I got the email from Jenni and I was ecstatic! Also, the day I sat down and started writing my first book, St. Leasing, I was really giddy. It was like I was finally doing this thing I’d always wanted to do and I couldn’t contain my excitement.

L.P.: The first book I wrote, St. Leasing, I sent to a few publishers and no one wanted it. Well wait, that’s not true. There was one publisher that wanted it but they wanted me to change a lot about it that I wasn’t okay with. (Side note, the same publisher that wanted to change St. Leasing turned down Play Nice) But rejection hurts either way you slice it. Writing is personal. You put a piece of yourself out there and when it’s not well received, it sucks. I wish that indie books got more recognition. There are some amazing indie authors out there and I don’t think they get the credit they deserve a lot of the time. My indie books didn’t really start selling until Play Nice was released with Borough’s.

Me: Talk to me about any mental health issue.

L.P.: Generalized Anxiety – side note, I have anxiety issues. Normal ones like fear of planes and water I can’t see through. But weird ones too. Like I don’t like emotional or romantic words said to me before I get in a car. I’m afraid I’ll die if you tell me nice things before I leave. Is that crazy?

Me: Funny you should mention that. My whole family is the opposite of you. In my family, we were conditioned as children to say those nice, loving things when someone leaves–just in case that’s the last time we ever saw them. That way our last words to them were good ones. Of course, this sorta kinda backfires when you’re pissed off at someone and they’re leaving and you’re saying in an angry tone full of pissed-off-ness and attitude. “Bye. I love you.” Not that it’s ever happened…:)

L. P.: And my husband has adult ADD. Bad. If we go on a car trip and he doesn’t take his meds…I want to push him out while we’re moving and then keep going.

Me: Lol. I’ve had moments like that on road trips with my husband.

L.P.: I think I’m a lot like Lexi in Play Nice. She’s sarcastic and loves to give the guys a hard time. Plus, not much offends her. She’s perfectly fine being surrounded by these rock stars. My husband owns this construction company and I’m surrounded by guys a lot. They say some interesting things when they think you aren’t listening…But it’s all really fun and entertaining. Oh, and I really do love Van Morrison and absolutely cannot stomach Jager.

L.P.: Let’s see…The St. Leasing series is three books so far, it’ll end up being at least five. Those three books I popped out in a matter of months. Never Ever and Happy Place both took about a month as well. All five of those books are my indie babies on Kindle. I actually wrote Play Nice in between Never Ever and Happy Place, but I took it off Kindle once Borough’s said they wanted it. It really doesn’t take me long to write. The hardest part for me is making my books long enough. I am a very insta-love, insta-decision kind of girl. We did these super in depth per 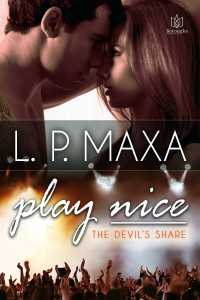 sonality tests at work and quick to make decisions is part of who I am. So, it’s hard for me to write the struggle for my characters. I don’t waiver, so it’s hard to write them doing it. Which leads to short books that people complain about.

Me: What is something you thought was true for a long time, then found out you were wrong?

L.P.: I am going to be super honest with you guys…I had the most horrific reaction to the documentary Blackfish. I loved SeaWorld growing up, it was one of my favorite places to go. I thought Shamu was happy as can be living in that giant fish bowl. And that documentary broke my heart! I couldn’t stop crying. I felt like my childhood was all a lie. To this day I won’t let my family take my daughter to SeaWorld. Whether Blackfish is 100% accurate or not…I just don’t let her go.

Me: Tell me about our novel PLAY NICE book one of The Devil’s Share series.

For Dash Conner, lead singer of The Devil’s Share, everything he wanted was his for the asking. Whiskey. Drugs. Money. Sex. But not Lexi Grant. For the first time since he picked up a guitar, a girl was actually demanding he woo her. And for a chance with this one, Dash would do that and more.

Lexi Grant was no groupie. Just because the biggest rock star in the world smiled at her didn’t mean she had to fall into bed with him—but it was going to be awfully hard to resist that impish smile and those tatted abs. Surely one night of fun wouldn’t hurt anyone.

Unless that night ended with a broken condom.

For Lexi and Dash that’s just the beginning. Add in an overly affectionate pit bull, a missing guitarist, a house full of sorority girls, a junkie ex-bandmate and an extreme aversion to Jager, and it’s either a recipe for disaster or true love.

Me: You had me at tatted abs.

Share with us a favorite paragraph or two from your newest release.

L.P.: I love this because it shows all my favorite things about the characters. Lexi doesn’t get offended and plays along. Smith and Jacks are comic relief, and Dash is starting to realize how perfect she is.

Damn. I pulled back and opened my eyes, the dim light from the room was almost too much. That’s how long I had been lost in Lexi. Jacks was back, looking thoroughly fucked. Oddly enough, I wasn’t jealous. “Where’s Smith?”

“He’s right behind me. Don’t worry, I didn’t leave him. Wouldn’t make that mistake twice.” Jacks rolled his eyes, grabbed a bottle of water and then laid out on the floor. His long body was almost too big for the small space. “So, you two seem to be getting along.”

Lexi climbed off my lap, “Did you find what you were looking for?”

I grinned at her tone, playful and curious. I reached for her tanned legs and pulled them into my lap. These little shorts she was wearing would be my undoing. I began to rub her exposed skin, “Well Jacks, did you?”

Jacks put his hands behind his head, “Of course I did. Did you?”

I looked over at Lexi, wanting to see her reaction to Jacks’ question. He meant no harm by it, but would she get all pissy with what he was implying? She threw a pillow at his head and laughed, “I did…Dash might still be looking for more.”

I shook my head, “Only if you’re the one offering, Kitten.” She bit her lower lip again.

Smith walked in, closing and locking the door behind him. “That was the worst head I’ve ever had. Ever.” He stopped short when he saw Lexi was still up with us. “Oh, uh, I’m sorry. I thought…Sorry Lexi.”

She just laughed, “No worries buddy. Sorry you had bad head, nothing worse than that, right?”

Smith stuck out his lower lip and sat on the floor next to Lexi, “No there really isn’t.” He laid his head on the couch, rubbing his dirty blonde hair against her hand like a dog.

This girl was perfect. She was sexy and beautiful, nothing offended her, she liked Van Morrison…I mean, holy hell. I got to my feet and reached for her hand. “Come on Kitten, bed time.”

*Don’t forget to leave a comment to be eligible to win $10 Amazon Gift Card.

If you are interested in being an Author on the Couch, email me at abbieroads@yahoo.com

Check out this week’s Manic Monday: Death of a Guru blog. There’s a giveaway!

Abbie Roads writes darkly emotional novels featuring damaged characters, but always gives her hero and heroine a happy ending…after torturing them for three hundred pages. Her first book will be out Summer of 2016.